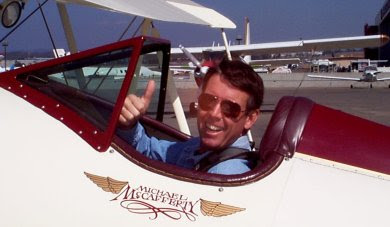 Summer 1997. Three months of touring Europe. The Waco was flown from San Diego to the factory in Lansing Michigan (now located in Battle Creek), then disassembled, put in a 40-foot container and shipped to LeHavre, France, then trucked to LeBourget airport in Paris, where it was reassembled and displayed at the Paris Air Show June 15-22. From there on it was fun flying throughout France, Switzerland, Germany, Luxembourg, Belgium, Netherlands, Denmark, England and Ireland.

Summer 1996. A 57-day tour of the USA, from San Diego to Maine and down the east coast to Kitty Hawk, North Carolina, then returning to San Diego.

Summer 1995. A one week tour of the west coast of the US, flying from San Diego to Canada, all along the surfline.

Summer 1994. A 6-week tour of the US, starting with taking delivery of the second new plane (N250YM) in late May, in Lansing Michigan, and flying to the east coast and back to San Diego.

Summer 1993. Take delivery of first new biplane (N50YM) at the factory in Lansing Michigan, fly to Oshkosh Wisconsin for the annual fly-in, and then home to San Diego. This first biplane was in a February 1994 crash when my instructor, flying alone, landed with the parking brake on and it flipped over on the runway. He was unhurt, but the biplane was completely destroyed. I traded the insurance payoff and some extra cash for a brand new biplane (see above). The first one was rebuilt by the factory and sold to Germany where it is now living a good life giving rides at the Hamburg airport.
Click here for photos and ride info