Next Flying Story to Be Written? 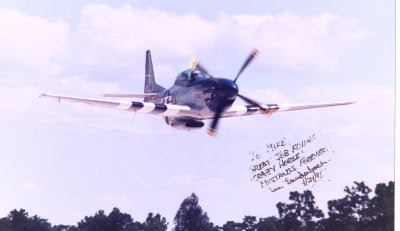 The P-51 Mustang was the most successful fighter of World War II.
It is generally acknowledged by children and experts alike as their "favorite airplane".
Only about 100 of these great aircraft remain in flying condition,
and they are extremely expensive to maintain,
so they appear only on special occasions such as the Reno Air Races,
air shows, and in very, very rare cases they are available
for joy rides -- a true once in a lifetime adventure.
"Crazy Horse" is located in central Florida and
I flew on a commercial airline (yuk) coast to coast
and lived in budget motels (double yuk)
just for the opportunity to fly this awesome aircraft.
However, my mission was even more specific.
I wanted to learn to fly it good enough
to be allowed to fly it from the front seat,
something almost nobody gets to do.
But, for me, it actually happened!
I'd like to write that story.
Stay tuned...